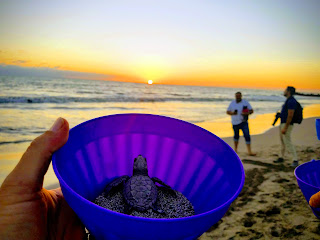 I've seen people post about releasing turtles on the beach...  Most of the time, it's at a resort or some organized tour (not my thing).  So, I've never done it.  But secretly deep inside, I've really wanted to....So, when we were in La Cruz in December, I learned about a turtle camp which is a pain in the A$$ to get to and NOT NOT NOT fancy in any way (think wooden shack on the beach).  It's the one that the cruisers locally support because no one else does - they're the underdogs.  I liked their facebook page because who doesn't want to see pictures of turtles???

That's when I learned that on the days when they have turtles hatched and ready for release, they put out a post and it's open to the public provided you can figure out where they are and get there.  Now, that sounds like my kinda challenge with my kinda organization.

This stayed in the back of my mind...... Now fast forward a month or so and we are back in La Cruz, and I mentioned to Greg that I wanted to do this.  There is no guarantee how many turtles are being released and the only directions I had was a picture of a google map location which was at least an hour bus ride away and a few towns.  Greg is used to these adventures and also enjoys them (most of the time).

A couple days later, the afternoon rolls around and we are just hanging out on Pura Vida and I see a posting about turtles.  YEP, it's on...  We text some new friends to see if they are in on the adventure and the reply with, "We're IN!"

With plans to meet at the dinghy dock, I start my reconnaissance.  Greg and I checked with a local cruising resource and were advised to take a taxi.  But I was confident (pretty much) that we had good directions with the google map.

After a quick debrief with the whole gang, I'm comfortable dragging Greg on an unsure adventure, but new friends, I'd like them to know it's a discovery exercise.

I won't drag it on, it went without a hitch, about a 45 min bus ride, then about a 20 min walk to the beach, then down the beach about 15 min to the shack on the beach.

We were even early.  But that's not a good or bad thing.  Because others did arrive and because there's no guarantee how many turtles, we're looking around and lowering our expectation to, "Gee, I hope we can at least see them"

Anticipation mounted while we waited for permission from the Mexican government to participate in the turtle release.  Finally, it came, and after a short talk about the turtles and their hatching life, baskets of baby turtles were brought out - and each of us received our own little charge to release into the night.

releases are done at sunset to give them the best chance of not being plucked from the sea.  the team is on birdwatch to pick the right time to set the little guys free.

I cannot say enough about how cute these little guys were.  They seemed so fragile, but they were also so powerful and they fought their way to the sea.

I highly recommend it.  Even if it's at a resorty place...  just because it's not my thing, won't change the little turtles being released - they don't care... certainly, the resort wasn't there many many years ago when turtle generations before them started going to that location. 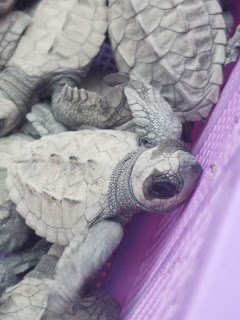