It's been about a month since we left Tenacatita.  Barra de Navidad which is only a few miles South was the next stop for us. 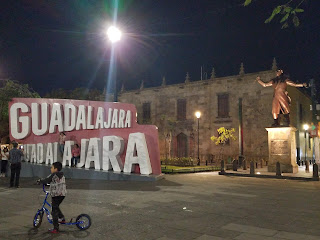 It was much less stressful entering the lagoon now that we have the Heather Mexico Guidebook.  She lists waypoints to make sure we don't go aground in the unmarked channel of the entrance of the Lagoon.  Soon, we were safely nestled in the calm Lagoon of Barra de Navidad.

Over the next couple of days we enjoyed the French Baker, Greg got in some surfing, meandering around town, stocked up on Barra shrimp, had many dinners out and tried to get our fill of 50 peso jumbo margaritas while watching the surf roll in. 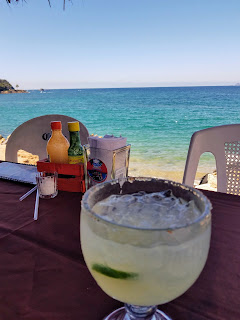 One innocent Friday night, Greg asks.....  "what would you think of a land trip?"  After sharing his thoughts......   a couple night in Guadalajara and then a couple nights in Ajijic.  We've been reading about Ajijic for a few years and have wanted to see what it was all about.

So the next day, we asked some friends about the bus to Guadalajara, then headed over to the bus station.  With the help of google translate and my limited Spanish, I prepped for getting us tickets. The first class buses (which are still amazingly cheap) are really nice diggs.....  lots of leg room, extensions for you to lay down, power sockets, sometimes wifi, bathrooms, a little bread something to eat with a drink, and super roomy seats - think first class on a plane.    I've been wanting to check these things out.....

So, we got our tickets, got all the pre-departure info and got excited about our trip.  All of the communication was in Spanish, so I was feeling super stoked...  I may have sounded like kindergartner buying tickets... but I had them and the seats I wanted.

Next morning, bright and early, we called the water taxi to make it to our 8am departure time.  A break from the heat, we packed jeans and jackets for Guadalajara.

The only little snafu is that we thought the bus station centro was actually in the historical centro... fortunately we realized it as we were pulling into the bus station so we could prepare a little.

Uber runs in Guadalajara..... GREAT.....  pulled up the Uber app and within 10 minutes, we were in our car heading to our hotel.

SO, not sure how much you guys have heard of the gas shortage in Mexico.... it doesn't affect us much on the coast... but in Guadalajara, we saw the brunt of it.  We had a nice conversation with the Uber driver (in Spanish) about the effects......  there are only about 6 gas stations in Guadalajara at a time with fuel, so they need to wait in long lines and pay an increased price.  Shocking to see the roped off gas stations on the roads.

Our hotel.....  $25.....  in the center of the historical district, updated and modern decoration in an old historical building.  Beautiful......

We spent the remainder of our time traipsing about Guadalajara....  We did join a cantina tour which was fascinating.  We got to visit true cantinas which have been a part of Guadalajara since it's beginning 400 years ago.  This was one of my highlights.......  Greg would say that as well, but he'd also add the Torta Ahogada (https://en.wikipedia.org/wiki/Torta_ahogada) 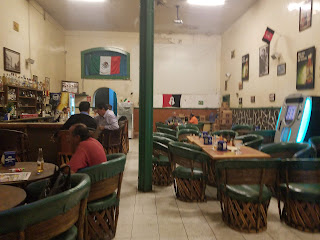 
We really enjoyed Guadalajara, Not in an "I want to live here" kinda way, but in a "wow, these buildings are so old, it's truly amazing to be among all this history. 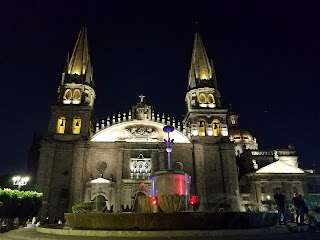 We had a great time just walking and meandering and exploring around.  We were lucky one day and stumbled upon a tour in English. After obviously eavesdropping (not even sure if it's eavesdropping if we are so obviously listening;-)).  We were invited to join the tour which was a walking tour about 2 hours hitting some of the highlights in the historical center.  Super glad we joined that one.  After it was over, we spent some time going back to visit places that interested us that we wanted to know more about. 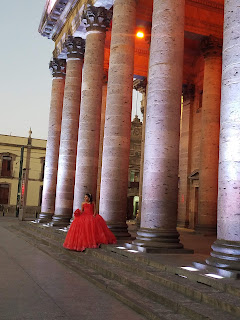 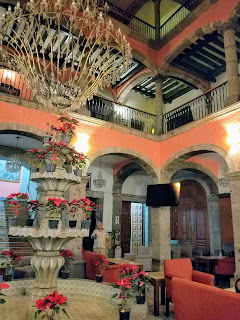 Lobby of our $25/night hotel 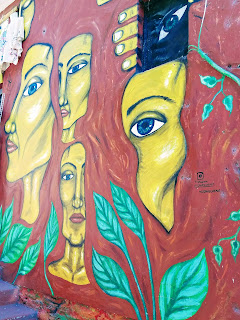 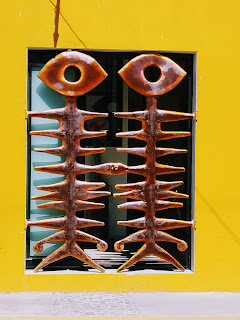 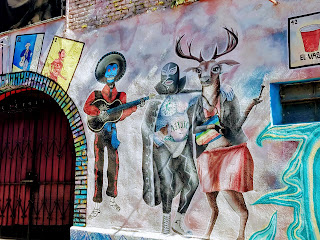 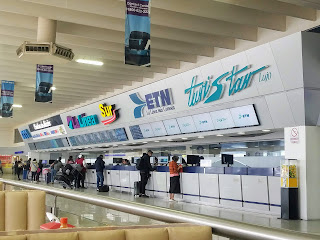 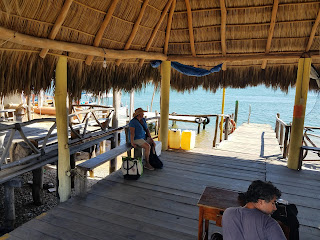