Wordless Wednesday: Highlight from the past week 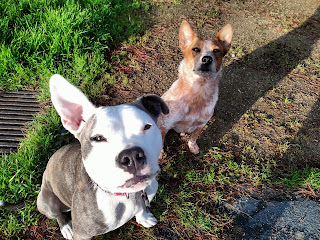 Break in a play session with Neighbor boat dog, Radar
Posted by Melissa at 4:03 PM No comments:

Better with two - depends on who you ask 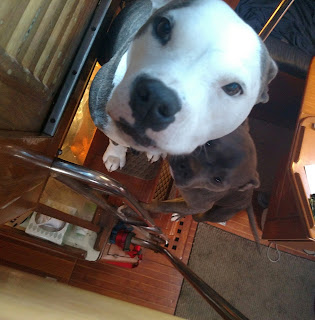 Here is a photo of the Abbot and Costello bit these two got me into this morning….  And yes, I need to explain.

As you know, we live on a sailboat – the entrance to our boat is an about 5 ½ foot ladder – it’s pretty darn steep.  Tack being 50 lbs learned (was taught) to climb it pretty soon after coming to live with us.  When Clewie saw the advantages Tack had of being able to climb out on his own, she also quickly found the motivation to do it by herself as well (though she will usually let us lift her unless she’s super motivated).

*** Going down is a different story, both dogs get lifted down… Greg and I have each devised the version we prefer to make it easier for us – but the dogs absolutely don’t jump….. unless it’s raining and we’re slow (or not super speedy fast) getting them in from the rain – because, of course, they might melt… it is rain after all.

Back to this morning….. I was headed out – climbed the ladder, moved the hatch, turned around and replaced it…. By this time,  they had climbed into the position above – Clewie sitting on the top step and Tack perched halfway up the ladder waiting for Clewie to move so he could climb the rest of the way.  Both were looking up at me with waggy “bring me with you” tails.

I don't like them "figuring out" how to get down by themselves (ie: jumping from a precarious position), so went to put them below myself.

When I opened the hatch, Clewie ran out with Tack following…..  I said back inside, grabbed Clewie and went back down to lift her below…. Reached up to get Tack, who ran to the back of the boat – then I head up to go get Tack and Clewie climbs back up.

I end up scooping Clewie like a football with one hand and climb backwards down the ladder while hanging on to Tack’s collar.  After putting Clewie down, I quickly get up and lift Tack down as well.

The next try – they both stay off the ladder….

Goofballs….
Posted by Melissa at 1:59 PM No comments: 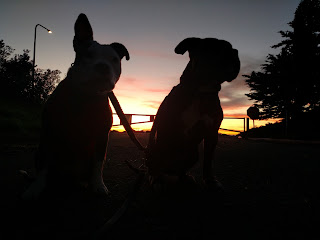 The most talked about doggie topic when people find out we sail with dogs aboard is about how they do their business.  We have a piece of fake grass that we use for them to do their business..... only on the grass.....  we don't want them to go in the marina on the boat - though there have been circumstances when one was sick that we did bend that rule.  Once, Clewie was on heavy doses of Prednizone for suspected MMM and needed to pee about every 2 hours.  My sanity needed her to use the "fake grass" some of the time.

And for the most part, I would rather they not just go anytime we are out sailing.  They are able to let us know they need to go - and we have been able to put the mat down, then pick it up when they are finished.   I also think that guests find this more tolerable - at least it will give you a chance to prepare grandma or kids that the dog is about to go to the bathroom.

The biggest trick in training this is to have them know to go on command, and on a fairly regular schedule (so you can predict it).  It's also helpful to have a good routine in place. for example, we regularly go out for "bathroom breaks" where we have a strict routine and distance for them to do their business. This also helps at home when the weather is nasty, or they are injured so that you don't have to go on a long walk just waiting for them to go.

But back to boat potty training, when you are all prepared and ready to try out going aboard - then, you be STRONG the first time you go out to try it at anchor.  If you cave after 10 hours..... and bring them to shore, then you have taught them to wait it out for 10 hours until you bring them to shore. The first time they go is the hardest - and when they do, make it the biggest party with high value treats you can muster.

We have full details about how to train this from Dr Dunbar (above)..... who we were lucky enough to attend his community training talks when we adopted our previous dog from the Berkeley Humane Society.  We asked him after one of the talks... and it has served us well... Matey was a superstar with taking care of her business while cruising and happily living aboard.  We have met many cruisers who need to go to shore every morning and evening.. which means no overnight passages.  It also means that in uncomfortable and potentially dangerous conditions at anchor - your dog would need to be brought to shore multiple times a day.  Once down in Mexico, we were boat bound in a Norther with gusts to 50kts.... it would have been uncomfortable, not to mention dangerous to have to row Matey ashore.

Clewie is well on her way to being even better than Matey - I can usually get her to produce one and two on command (as long as she has something to do), she really gets it....  Tack is the reason for this past weekend's project.  He has pee down pretty good, but struggles with the serious business.  It helped a lot to actually put on their leash and say the same words/routine as when we go out for a bathroom break in the marina.  He is older, about 4 years old (3 when we adopted him), so that could be the reason.  But he's also a more cautious dog than courageous Clewie.

Our toilet is a purchased piece of fake grass mat ... which was pre-cut.  The size is a little bit small for Tack... I believe.  I suspect when he gets more experience, it will be fine being smaller, but this weekend, I thought I would make it a little bit bigger by attaching a larger piece of astroturf.  Kinda like toilet training wheels.

My hope is that he will be more comfortable with the larger target and then I can trim it down a bit.  But since it's been awhile since we did an overnight at anchor - they think it's a nice lawn on the back deck that I've created for them.... 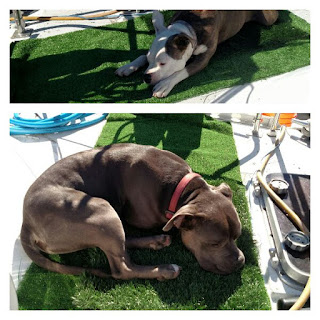 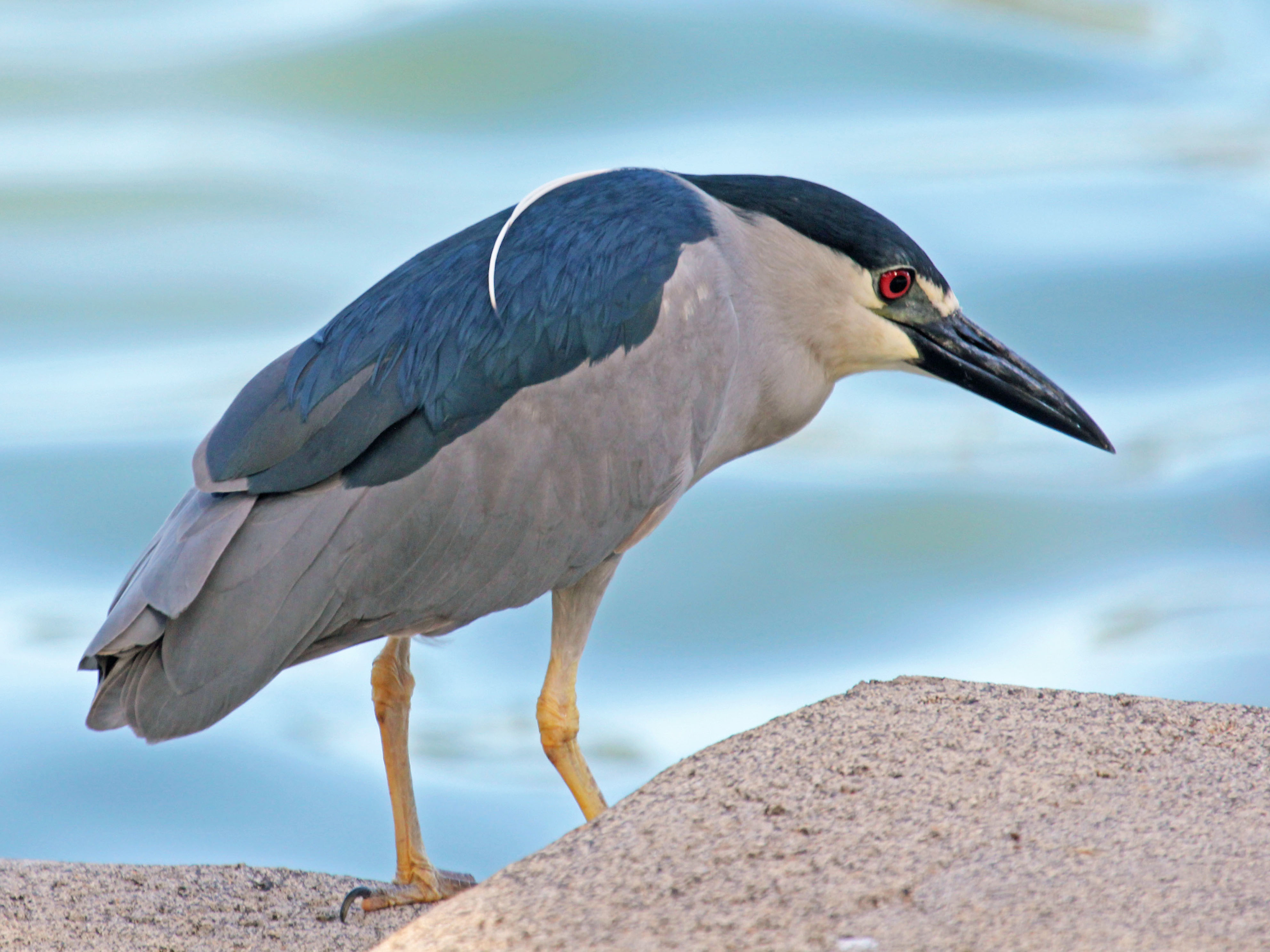 
This is not my photo.... though we see these guys on our dock hanging around almost every evening.  Unfortunately, When I have Tack or Clewie with me, they are too focused on loosing their marbles for me to get a photo... I want to, but I can barely manage unlocking the gate and walking through.

So, birds are a perk for our dogs living on a boat - they get to see amazing wildlife up close and personal.

Here's a video of Clewie discovering how much fun sailing can be - though we are motoring...  but back from an overnight to Sausalito a couple of months after moving in with us. Clewie and the birds

I'm not so crazy about them chasing the birds.. and the rule has been they can sometimes stay on deck while we are home... but once the bird chasing happens, they need to come back inside.  Tack is a little calmer than Clewie, so he can usually handle lounging outside a little longer/better.

The also love the bird poop on the dock along with the mussel shells the seagulls leave around after they've eaten their meal.

They've yet to enjoy chasing schools of fish in clear warm water... but perhaps one day.

Bird life definitely gets two paws up from the furry Pura Vida Crew.....