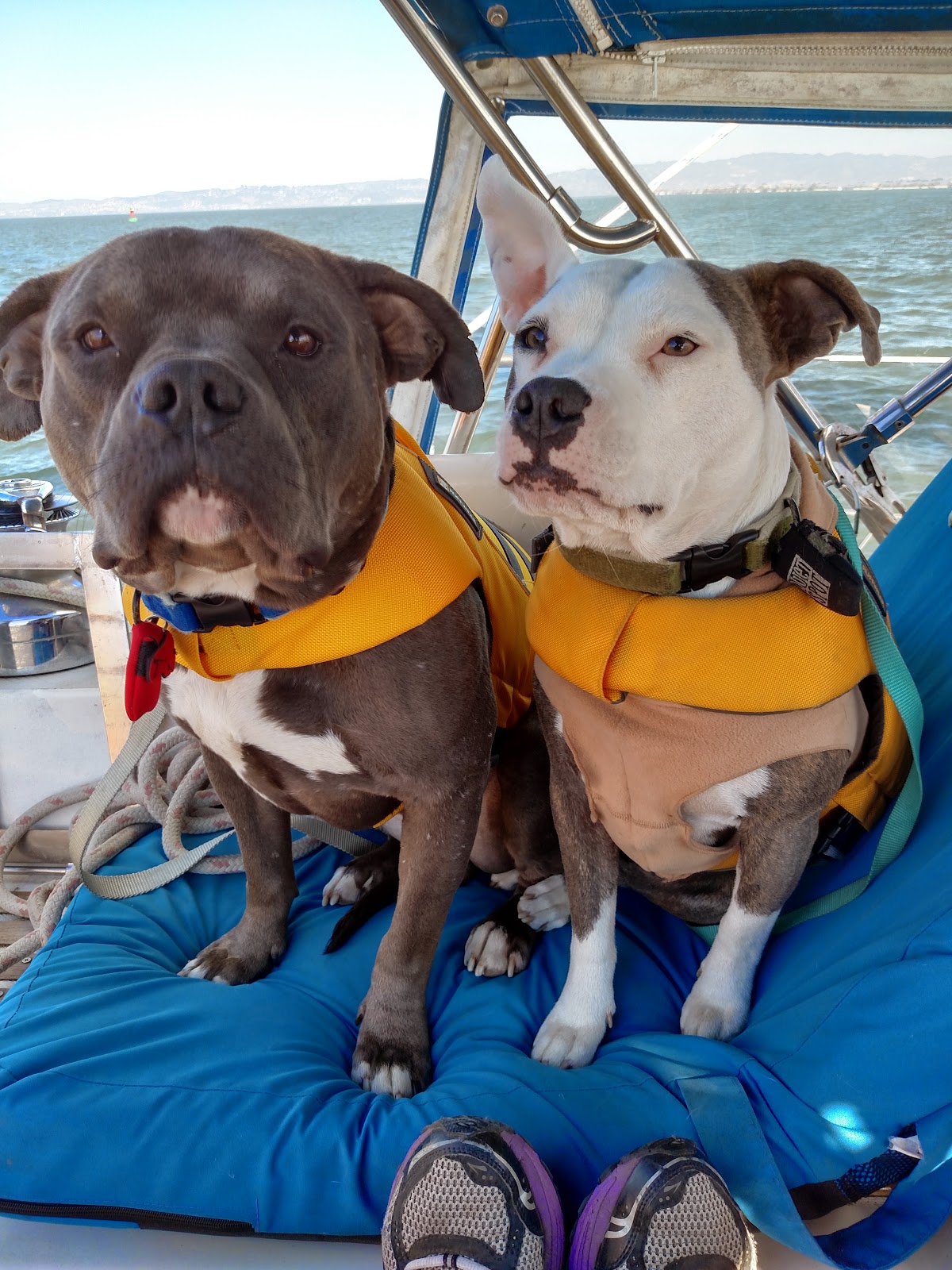 Tack had his first sail yesterday.  No shaking, no tail tucking...  he was a brave little boy.  Clewie ran around like crazy - chasing birds.  At one time we passed a sea lion on a buoy and although I don't think she saw it, she got a whiff of him and it started a barking fest with her running around the boat.
It makes me a little nervous about the first time they see dolphins swimming with us - but I think we have a little time before that can happen.

So a little about us.... My husband and I livaboard our Hylas 47 sailboat - with Clewie and Tack. Greg and I have lived aboard over 15 years together.  We had a dog previous to the current canine crew who was with us for about 11 years before she passed over the rainbow bridge a year ago.  Her name was Matey - she was a sheperdy mix, about 45 lbs.  She did coastal trips with us, day sailed, went fishing, rounded point conception I think 3 times, spent a season in Mexico, crossed the Pacific to Hawaii where we cruised with her for a few months before crossing again back to Berkeley.  So, we are used to having a dog aboard - though this is our first time with a mini pack.

We did also have a male pitbull aboard for about 6 months until we realized that we weren't a match. That was about the hardest decision I've ever had to make and hardly a day goes by that I don't think about him... but sometimes it doesn't work and if Greg and I hadn't made that tough decision to return him to the shelter we adopted him from, we wouldn't have Tack and Clewie in our lives.

A little about Clewie - she's been living with us about 4 months.  She's about a year and a half old. She's super silly and playful.  She pretty much adores all dogs and people... she had a fractured hip when we adopted her which had healed wrong, we've had that fixed and she's now pain free and playing again - though she can't go completely crazy on it yet.  She has been just about perfect - a very easy-for-us dog.  We had been thinking of having a two doggie family and thought it would be fun.  Clewie seemed to love just about every dog we've seen her meet.  So we were open to an addition.

A little about Tack - Greg's mom was interested in getting a dog, so we had been visiting shelters with her.  New Year's eve we visited the Martinez shelter and saw Tack..... he was about 12 lbs underweight - his backbone and ribs clearly visible.  But his temperament seemed so calm.  There was utter chaos going on around him with barking jumping dogs - at one point while we were there, the dog next to him threw himself on the wall - but Tack was calm, he did look around in the directions of the chaos - but no barking and except when someone came to his door on the other side of the kennel to open it, he always quickly turned his attention back to us.

We couldn't get him out of our minds and decided to bring Clewie down to meet him and try it out.  Everyone we spoke to said we weren't going to really know until we actually tried it.  He and Clewie got along from the start - not super excited play - but a definite interest in each other.  We took him home.

Since then, there have been one or two instances where someone (Tack) growled with Clewie after too much excitement.  She can be pretty annoying with her continuous play invitations... but he seems to enjoy it and usually starts to play with her, or moves away to go lay down somewhere else.  Fortunately when he walks away, she lets him go.  Daily - they snuggle together - they really do enjoy being with each other - that is obvious.  Clewie is over the moon happy to have Tack.

We're really lucky that they've been able to share a boat, bed, back seat of the car, toys, bones, water without incident.  I know this is luck, not skill, and we are very grateful. 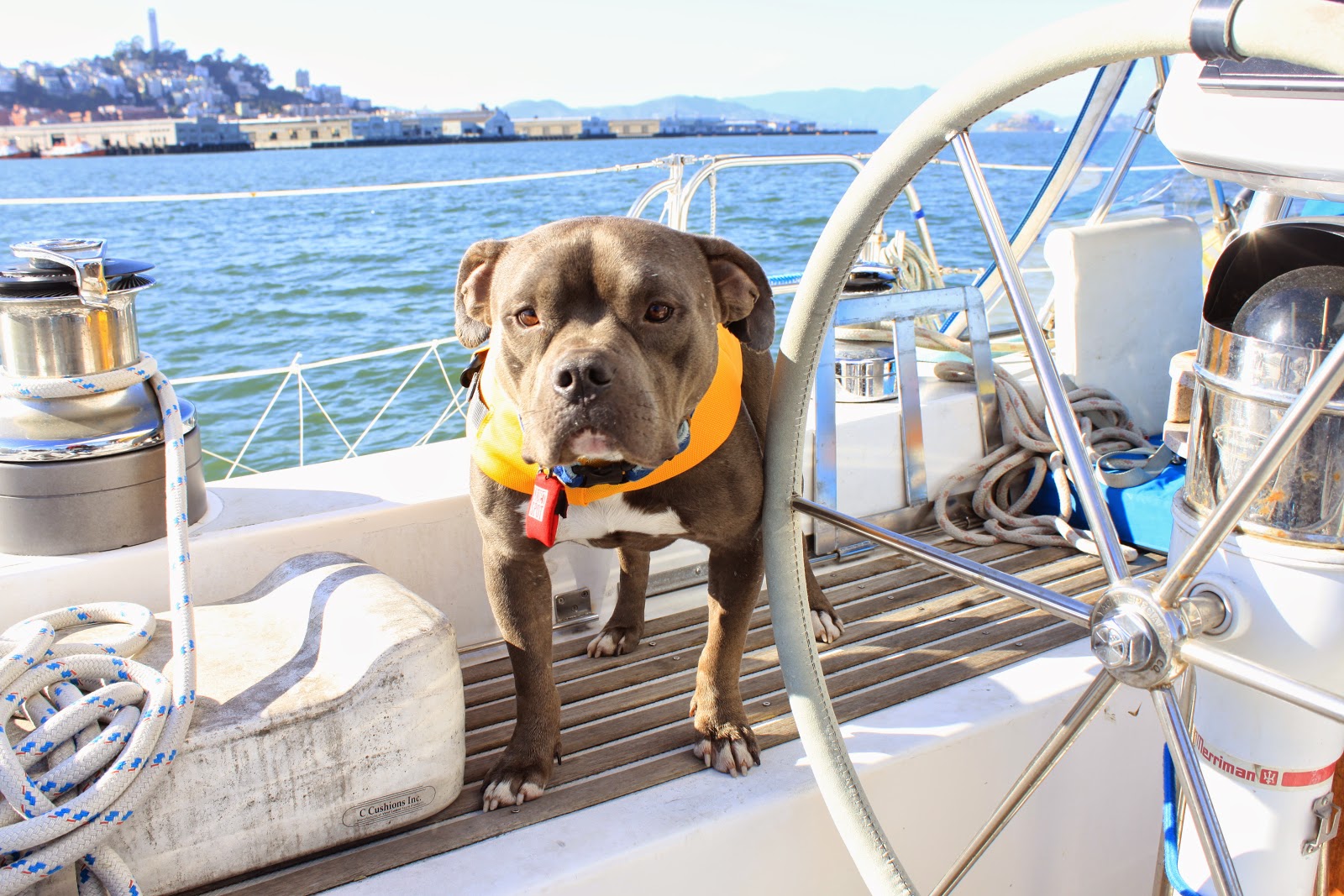 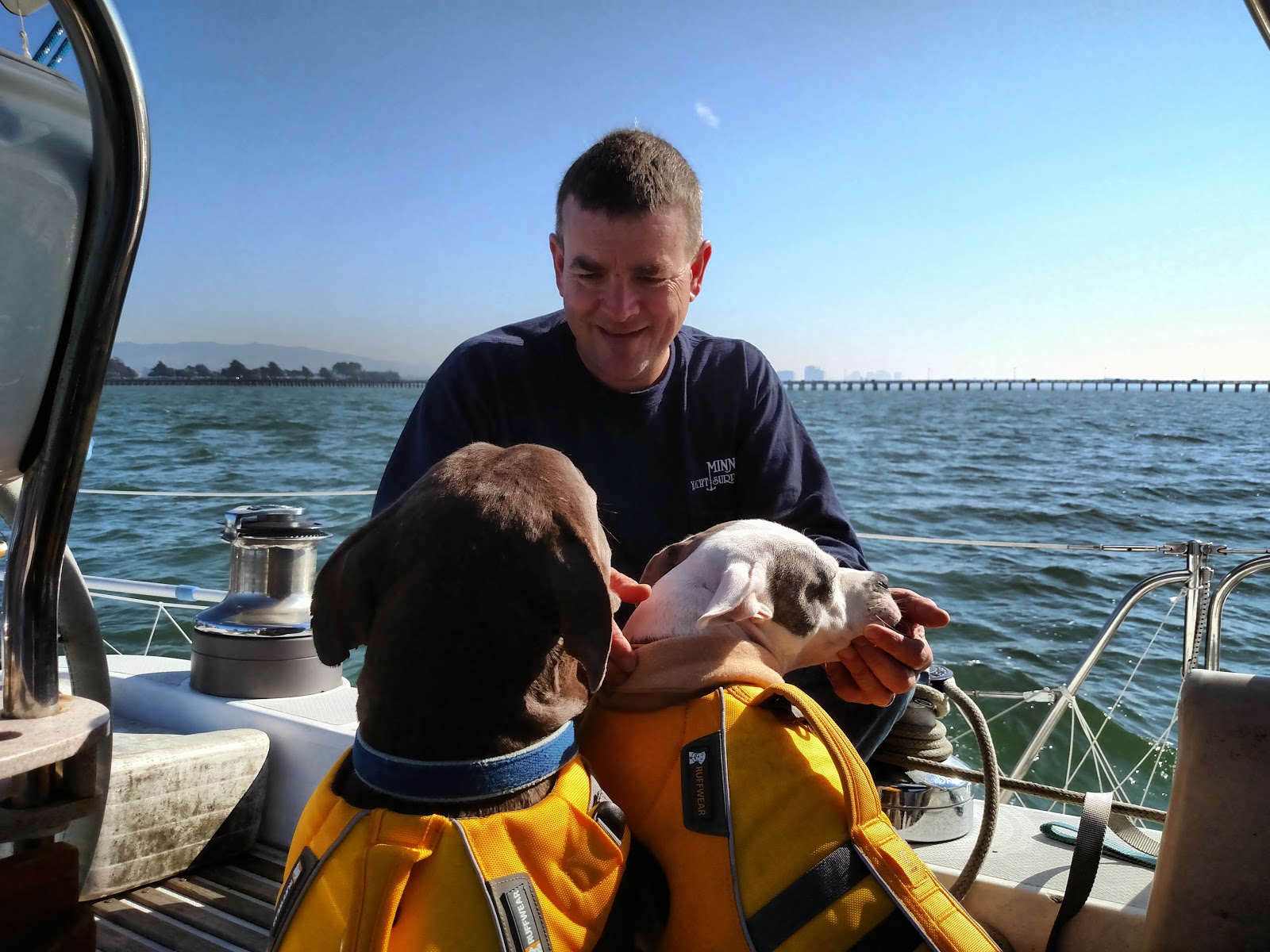 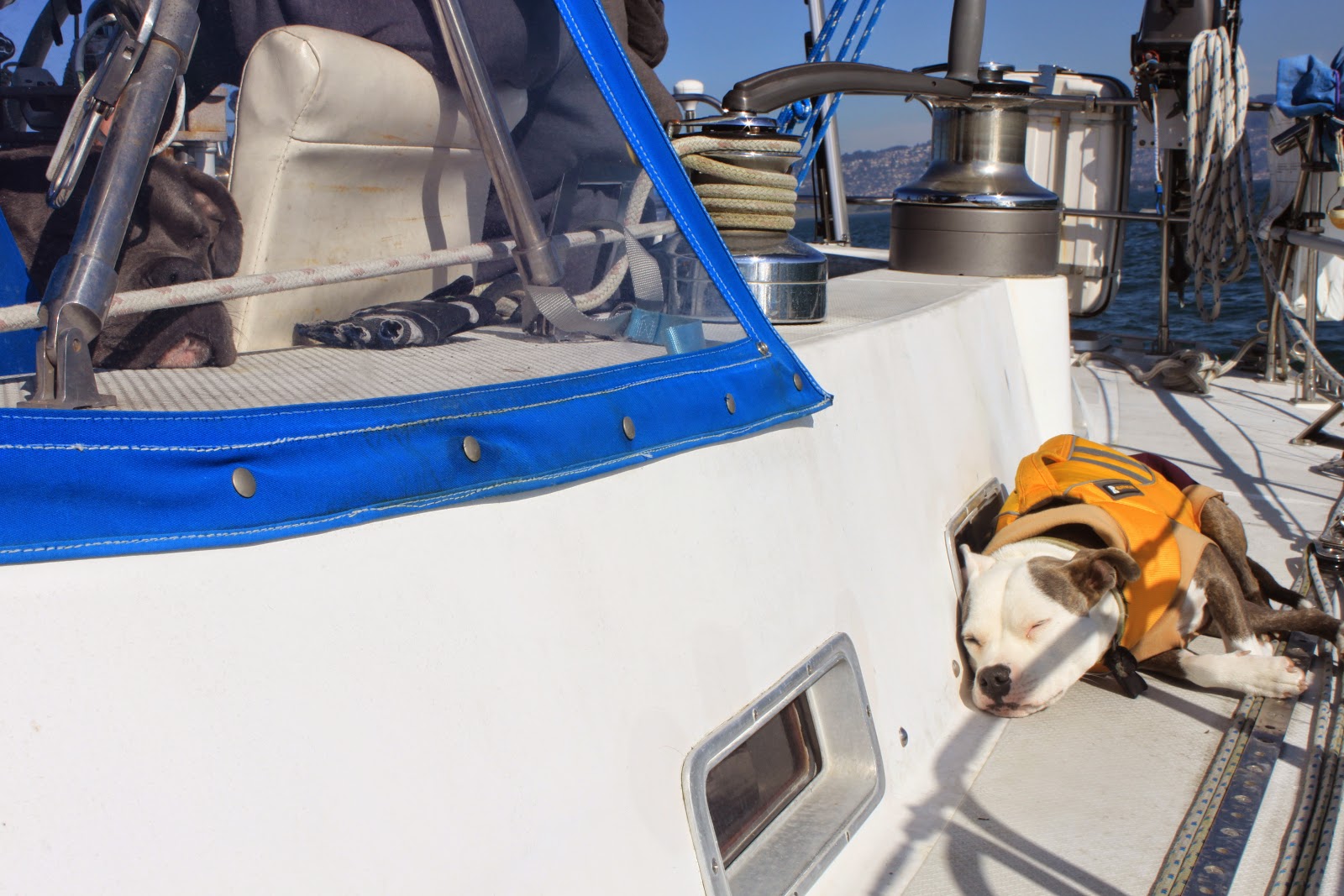 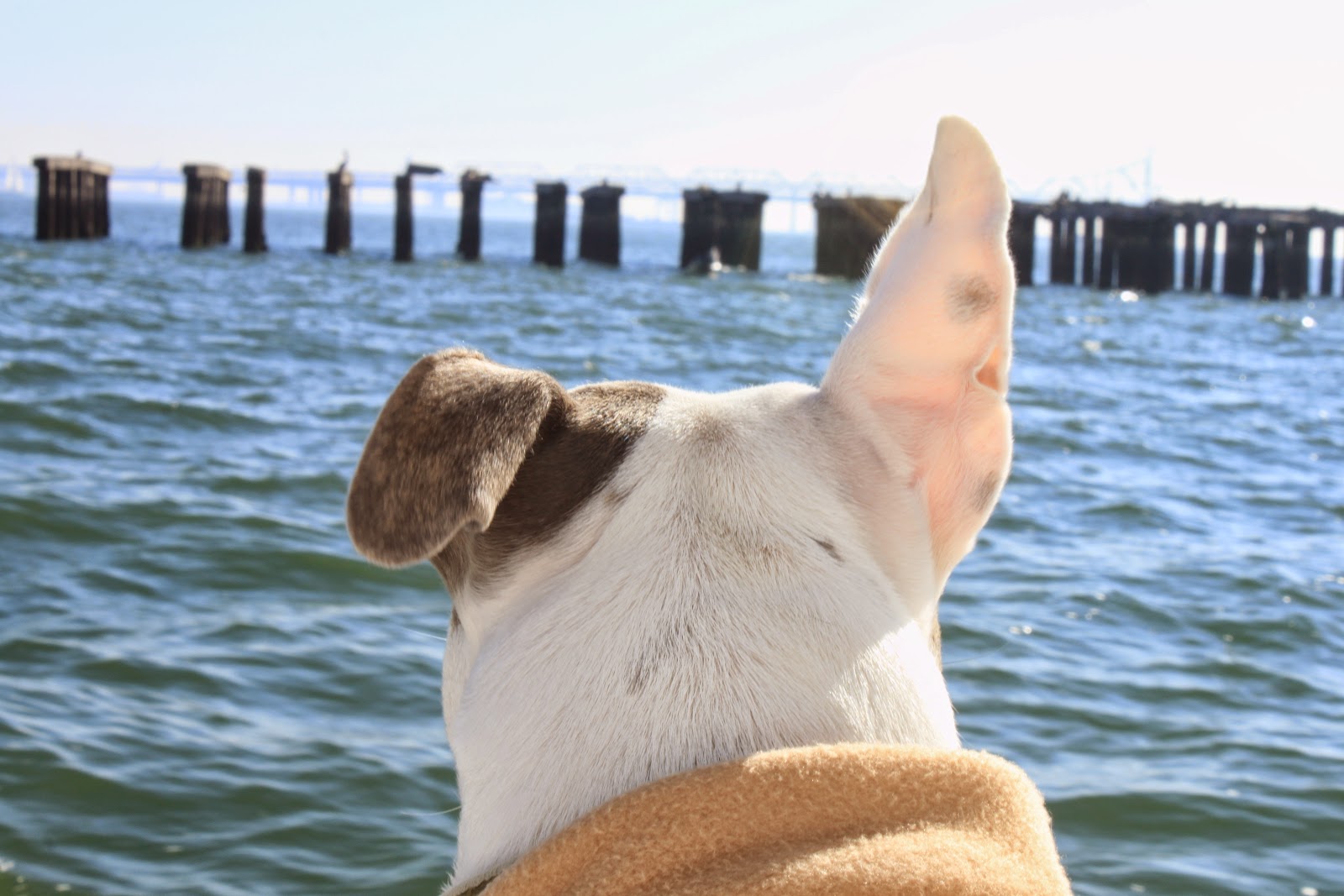 We’re back…..  really we haven’t gone anywhere….. our cruising has slowed because Greg is working most weekends while I am at my Mon – Fri  job.  Readers might also notice a new title “Two Pitties Afloat” and wonder what happened to Matey.  We lost her pretty suddenly – she had a spinal injury while recovering from TPLO surgery early 2014.  It was a tough time…..
But we have added furry crew again to Pura Vida – this time 8 paws aboard……..  Clewie and Tack… they’re pitbulls and we’re having a blast with them.
Clewie joined our family September 2014, and Tack joined up this past January.   They’ve each had their dramas – some together, some separately.  They’ve both been out sailing and it’s been fascinating to see how they each learn from each other.
I just wanted to introduce them – we’ll have adventures coming……

Posted by Melissa at 5:05 PM No comments: