Yesterday was a fun - though eventful day (well, my doggie vibes were ringing high stress...). The Maltese Falcon was coming into the bay (falcon's - those are big aren't they -- I don't know I'm kinda over my bird thing anyway). For those that aren't into sailing, she's the largest on deck sailboat - 289 feet. She has a state of the art Dyna rig which has carbon fiber masts. Mom and Dad seems to be impressed with that, you can find out more about her from her website at www.symaltesefalcon.com. So we on Pura Vida invited some friends and joined a couple hundred other boats out there to escort her into the Bay. The photo above is one mom took after she passed us, be sensitive with the quality - it was a bit rolly as she was out there hanging onto the roller furling trying to snap photos for a photo merge.

Our day started early around 10:30 - we actually had to motor most of the way to Richardson Bay where we wanted to drop anchor for lunch. But we did get to roll out the jib (the main was already up so that we could at least pretend to be a sailboat) in Raccoon Straits and rode the nice breeze into Sausalito. 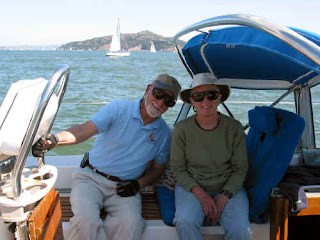 After a leisurely lunch, we pulled up anchor and all the yummy food went away just after 1pm, so we could get ready for her arrival at 2pm. It was really windy - but Pura Vida found her groove with a single reef and the little guy up forward (the staysail). We were happily enjoying the brisk wind. 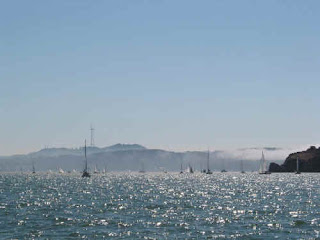 A little outside the Gate the crew was complaining that if the Falcon was going to make it, we should be seeing her by now -- when out of the fog came her masts which together looked a lot like a bridge base...it was pretty awesome!!!! As she got closer we tacked over so we could get closer.

Can you imagine her captain, not only was the owner aboard, but he/she had to deal with hundreds of boats sailing directly at her....I'm sure he gets paid a lot to deal with that kinda stuff. She's not the kinda boat to sneak into port.

Anyhoo- I was mostly excited about the sea lion we sailed up to - I guess he was so used to all the activity that he didn't seem to want to bother swimming away from us and just let us sail past as he swam along .... I love these swimming animals!!! 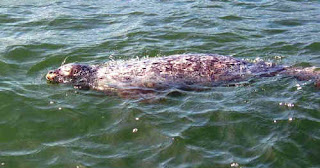 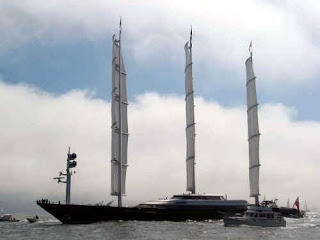 Sooner than my parents would like to admit the Falcon passed us by, this will end up being a very good thing because when were were a little outside the Gate Dad started to steer a little weird till we found out....our steering broke!!!!! Ahhh, HELLLOOO.... Glad THAT didn't happen 10 minutes ago when there were boats all around us. 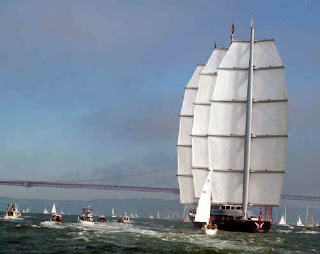 Fortunately the one boat close by - we headed up to just scoot behind him. Then Mom, Dad and John when scooting around getting the emergency tiller set up. Whew - that was working, then Dad discovered the autopilot was also able to steer.

We carefully made our way with the autopilot steering back to Berkeley. 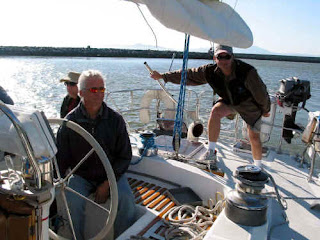 As we got into the marina Dad brought us safely into our slip with the emergency tiller -- YEAH!!!! Though, Dad has his projects laid out for him next week before our cruise to Sausalito next weekend.

So for those who don't know - it's official, my dad got his 50ton Near Shore Captain's license!!!! So now I have to bow when I pass him and greet him as Captain, Dad.... But I still try to steel his spot on the bed :-) 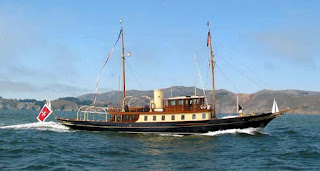