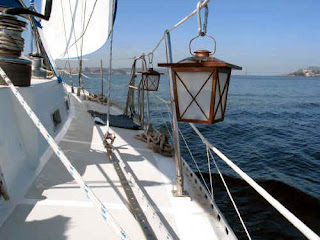 April's Club cruise found the fleet heading South (no not the Mexico South, but the South Bay South). We were headed to Coyote Point. We've never been there before, so thought -Cool - that would be GREAT!!!!!! Greg and I signed up.

Most of the rest of the fleet headed down on Friday where Greg and I were only able to attend a Sat/Sunday cruise. Our Saturday morning started off nice and easy to eventually turn into a little too much easy (translated into no wind). 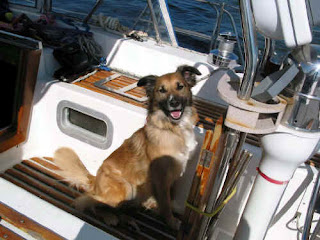 Matey was ready as ever and put on her perky sailing face to enjoy the sunny downwind sail.

Along the way we came across this anchored ship - what a sight. You can see by the lack of whitecaps just how calm it is. 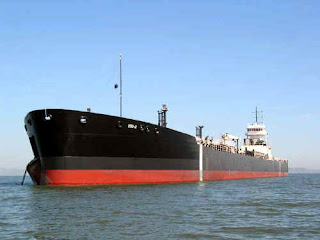 It was good sailing day though - but all days out sailing are good - well, most are, I can think of a few knarly ones that I'd trade in for a nice calm dry cube to work in.... 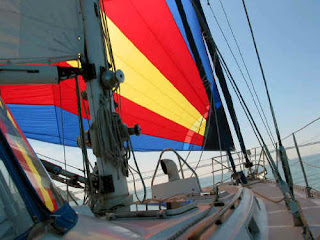 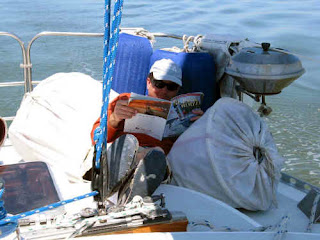 So, Coyote Point is known for Windsurfing. One of the reasons it's known for windsurfing is because it can be really really windy. This day lived up to it's reputation and about maybe a quarter of a mile outside the marina, the windstorm began. So here we are in one of my favorite positions of coming into an unknown marina in super windy conditions. Now lets add onto it shallow water.....then in the spirit of keeping it interesting, lets throw in a little bit of narrow searoom. Not the most calming for a 47 ft boat with a 6ft draft.... but we're still fairly positive as we head to the far side of the marina to see if we can find the yacht club -- now where is that place? We weren't able to get anyone on the radio so we were solo and winging it. We bailed on the first option of the far side and decided to gamble on the outside fairway. We figured worst case scenario we couldget

ourselves turned around - though it was a little freaky heading down toward an obvious dead end. After one instance of plowing mud, we were able to see other club boats ties along a bit of dock at the far side of the marina. Unfortunately there didn't seem to be room for us, but we did find a nice end tie to temporarily tie ourselves to. 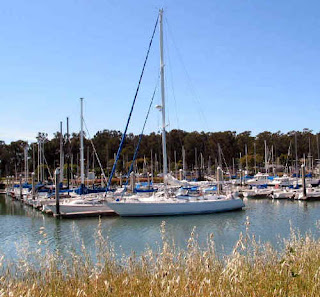 Then after a couple of calls to the yacht club management, then to the slips owner, we were able to find out that we were welcome to crash there. So although we weren't with the rest of the fleet, we did have a safe place for our girl.

There were a good number of others already there - and one other to come after us. 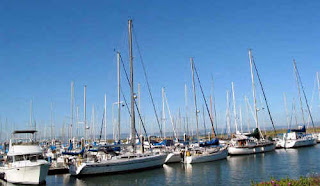 After a little walking around - bringing Matey out to the point to pounce around. It was soon time for happy hour at the Coyote Point Yacht Club. 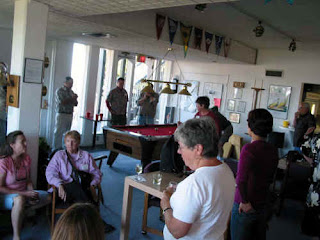 We enjoyed dinner at the golf club - very civilized.

Afterward Greg and I had a beautiful walk back to the marina through a wooded park. I didn't mention earlier that the marina is right next to a great park (well, great except that dogs aren't allowed), so perhaps it's a beautiful park. It made for a nice walk to the restaurant through park trails.

The next day we slept in and lounged while most of the rest of the fleet departed early to avoid tide issues. We opted to stay back (as did Done Deal) for the second tide cycle so that we could enjoy a lunch at the The Sherman an old Army Ferry that is now a restaurant. Follow the link to get a great WIKI article writted by Kevin Murray of Done Deal. After a yummy lunch and a bottle of champange on the house, we headed back to the boats for a game or two of mexican train. It's funny Mexican Train is a well known cruiser game (perhaps because it's so easy to play while still drinking). But we didn't play it the first time till after our return from our cruise...

Later in the afternoon, the tide came up enough for us to get out of the marina (Done Deal draws 7 feet) and Done Deal and Pura Vida had a romping time sailing North in the blustery winds. 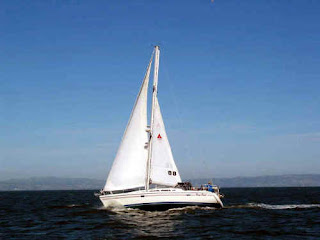 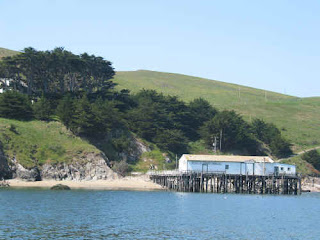 So this story is a little old, but about 3 weeks ago Greg, Matey and I decided enough was enough and Pura Vida needed to get outside the Gate. Originally we planned on a Half Moon Bay trip, but since there was more hope of wind on Sunday we opted for a Drake's Bay trip so there was a chance of a downwind run. That's the coolest thing about cruising - there are no rules and you can do whatever you wish including changing your mind to go where the wind blows - or doesn't blow as this weekend will work out. Anyhoo - we wanted to anchor somewhere away (as away as you can get in a 2 day weekend), so we were going...

Tides were perfect to head out from Berkeley on Saturday morning, and we had a absolutely fantastic sail...to Alcatraz that is...). At about Alcatraz, the wind shut down. Turned on the engine and motored our way with the tide out the Gate and on up to Drake's. 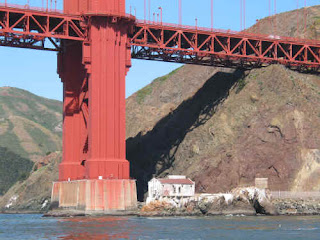 Fortunately the gods smiled on us a bit and as we entered Drake's a warm breeze picked up and we were fully powered up for the last hour and a half inside the Bay (ie. flat water). It was awesome! 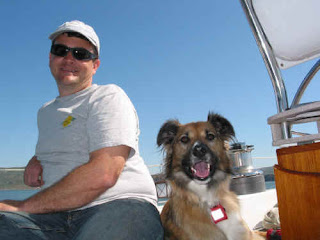 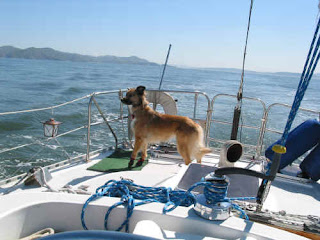 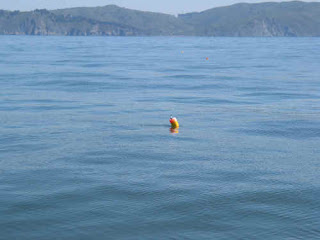 There were tons of crab pots along the way....

There was one other sailboat. We dropped anchor in about 12 feet of water and enjoyed the serenity. 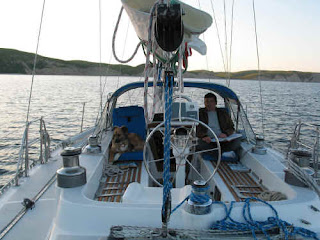 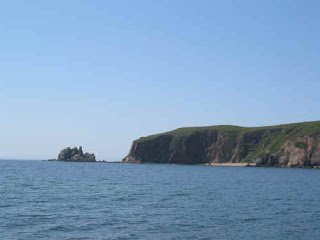 Over the evening a couple of fishing boats joined us further out, but by the time we woke, the sailboat was gone as were the fishing boats. Since the tides were right for hanging around, we lazed around till just after noon and motored back to San Francisco (yes, motored for there wasn't wind yet again). But as we approached Potato Patch, the fog bank rolled in bringing with it the wind. 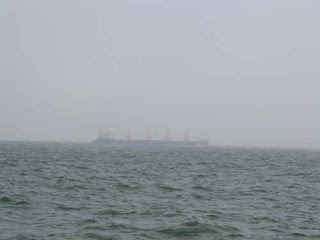 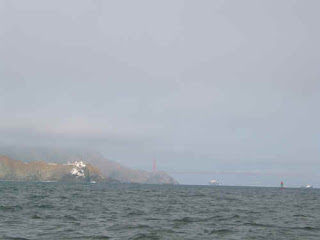 We had a great ride back under the Gate and on into Berkeley.
Posted by Melissa at 11:30 AM No comments: