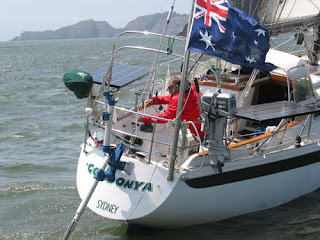 Friday started off with lots of energy around N Dock -- everyone was A..BUZZ, for the renaming ceremony was tonight and Simon was leaving tomorrow. When 6pm rolled around, we had the dock full with Simon's friends. He had been here such a short while, but like the greatest doggie, he had warmed his way into many hearts. Simon was N-dock's best friend!!! 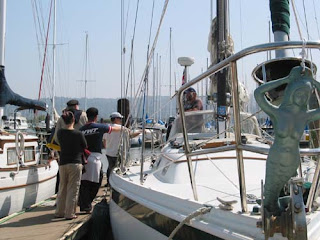 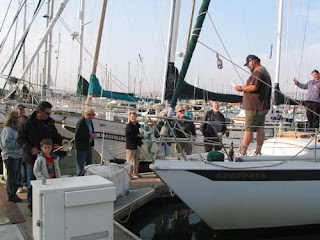 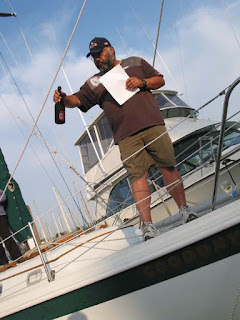 The list of attendees were, Bob and his son, Russ and Maureen ( Simon met Bob and Russ from Sailnet), Greg and I, Lars and Margit, Joel, Jolanda, Liz and Kathy, Ted and Melissa, and Enrique and Peggy.

Pacifica was soon scratched from the Roles of Neptune and Goodonya took her place. And champagne toasts were all around.

We soon brought the party to the yacht club to enjoy beer, burgers and steaks.

It wasn't a late night, Simon still had lots of stowing to do.

Early in the morning after banging on Goodonya's hull around 8am, we made sure Simon was awake. Of course, he had been awake most of the night - he said he was busy playing around with the radio and doing odds and ends till well into the wee hours of the morning. Who could blame him - kinda tough to sleep on the night before you leave on a single-handed crossing of the Pacific.

But today we had a boatload of people aboard Pura Vida to escort Simon out the Gate, and friends again started to converge on the dock to wish him off. Bob and his son came back as did Lars and Margit. We were all washing and cleaning on Goodonya helping Simon get ready. He had the hard part of stowing his gear. 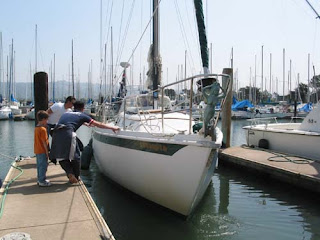 Finally around 11:30, he started up the engine - I had already removed the boarding step, so no more shore leave - he had to go. But after shakes of thanks and more well wishes, he put Goodonya in reverse and Ted and Bob walked her out. 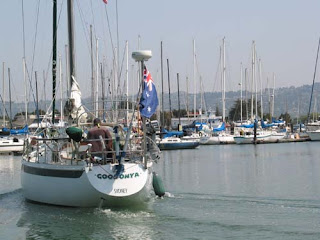 Then we all walked over to Pura Vida to back out ourselves and give her an escort.

Sails were raised in the marina and it looked to be a beautiful day for a sail. Upon rounding the breakwater, we see Good Grief (Russ and Maureen) waiting patiently for Simon. 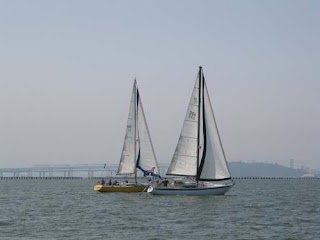 The three boats flittered around through racing fleets in the blustery wind toward the Gate. 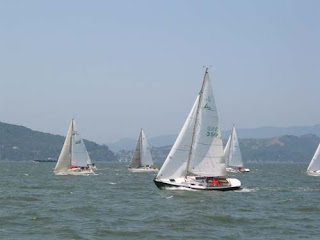 The racing fleet that we crossed paths with a couple of times. 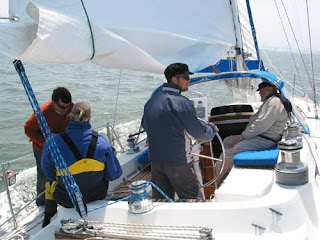 Our gang - the only one you can't see is Melissa (Ted's wife) who is tucked under the dodger.

It was a fabulous windy day send off. We (on Pura Vida) did have to pull in a bit of sail to keep our speed down so we could stay at about the same speed as Good Grief and Goodonya (remember we are a 47 ft boat, so it does go faster, but we wanted to hang with Simon just a bit longer). A little sidenote - I think this is the first time I've heard Greg say with a sad voice, "We're pulling away from them so fast". 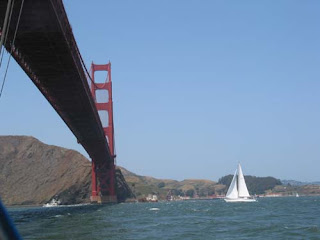 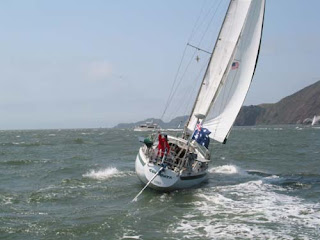 Simon outside the Gate.. 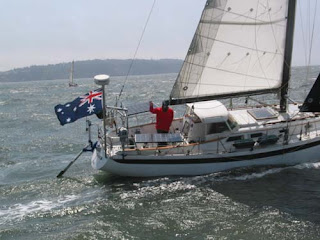 Simon with the Australian flag flying! 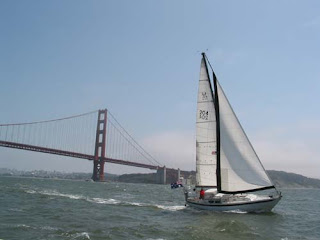 Too soon we reached the Gate and headed straight for Simon to get some close photos. There was lots of waving, he even slowed for a little bit enjoying the moment. But then it was time, ... for him to tighten back up the sails and head further West and for us to fall off East for our downwind sail back home. After final radio Goodbyes, well-wishes and huge waves, he sailed away. 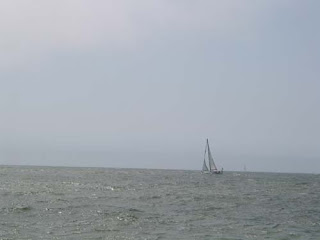 Back at home after dinner, I have to say Greg and I were sad to walk through the Gate and not to receive our usual warm welcome from Simon. He'll be missed.

And Simon - when you read this - we'll be waiting for your return!!!!