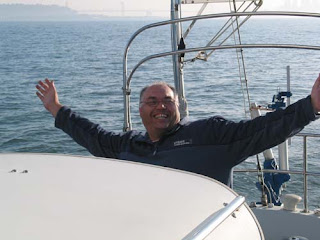 This is Simon, he's Pacifica's new owner and this is a happy day for him (bittersweet for us). This was taken during his test sail. We couldn't be happier about the sale. Since Simon is Australian and returning home, Pacifica will be leaving the Bay area within 90 days for points South on her own bottom. She'll visit Mexico again, then the South Pacific and on to Australia. She'll also have a new name - GOODONYA and I hear she's also going to get a paint job, that'll be nice to see!!!!

Now for a nice story about how Simon and Pacifica found each other (I don't want to call her GOODONYA until after her renaming ceremony ;-) ). Simon in doing his research in cruising Mexico and beyond stumbled on our website while we were still in Mexico. He enjoyed our ramblings so he turned his dad onto the site. Then one day his dad noticed Pacifica was for sale and called up his son to share the news. Fast forward a couple of months and we're all sitting in the yacht club having a beer to celebrate.

We wish both of them the best and if any of our friends out there see a familiar looking boat named GOODONYA - stop by to say hello, you'll be glad you did, Simon's a great guy!!!!


NOTE: Matey was at her Nonnie's house during this cruise so I'm sorry she is not in any of these pictures. She was with us in spirit, we just thought so many people on her home would be to stressful for her. 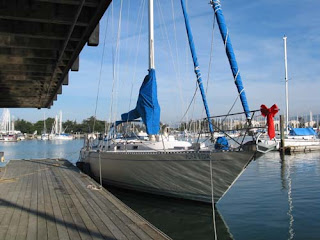 Every year the Berkeley Yacht Club has a Mystery Cruise on New Year's Day. With this year's Commodore Jeannette (and her husband Henry) aboard, Pura Vida played the role of the host boat. We had a lot of fun drawing out the mystery part, but the winds weren't cooperating with our little games, so instead of fighting it, we adjusted and announced the location of Aquatic Park - a beautiful often overlooked cove off of Ghiradelli Square in San Francisco. 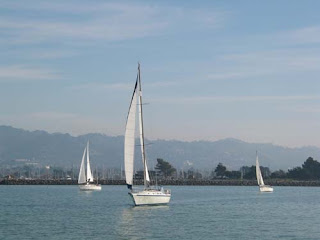 A few of the BYC boats heading out of the marina - we had just given the first coordinate. Our original plan had us then giving a heading into Aquatic Park, but we aborted the navigation practice in the light winds so we could enjoy lunch 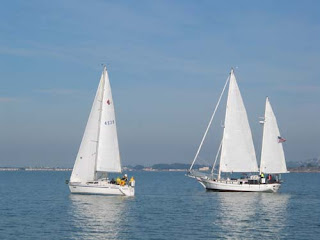 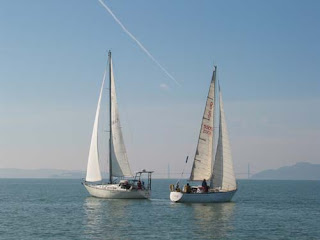 But there were still surprises in store for the gang that we didn't share just yet - though we did warn folks to get their fenders ready to raft up. Windsong and Diva graciously added to our holding power by dropping their anchors for the 8 boat raft up. Though I'm not sure how much holding power Diva's 12 lb lunch hook added to our 50+ ton raftup. But the wind was light and we were only there a couple of hours. But rest assured, we backed down hard on our new 73 lb Rocna and as predicted brought up about have the bay floor with it when we left (you definitely want a brush).
Below are some pictures of the raft, our only regret is we weren't able to get a picture from a dinghy of the entire group... 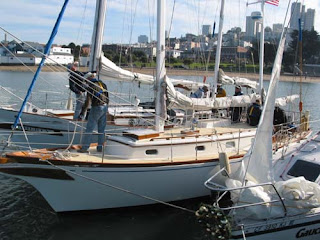 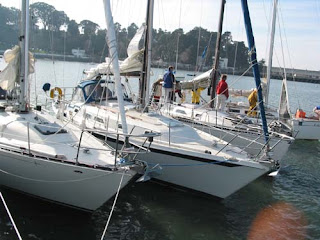 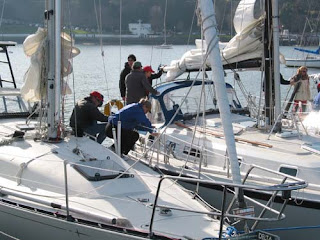 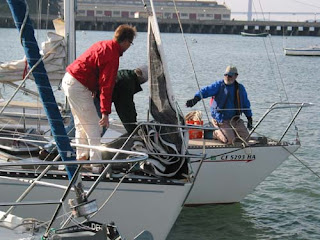 Shortly after getting settled, plates of food soon started flowing out from below on Pura Vida. We all celebrated with a southern Irish traditional New Year's Day dinner of Corned beef and cabbage (for Money) , black eyed peas (for luck) and 9 green salad (I assume for health, but am not totally certain). 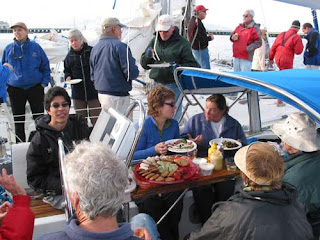 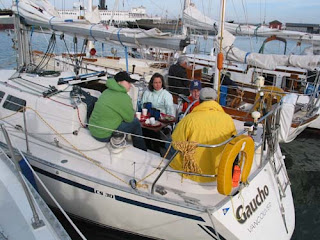 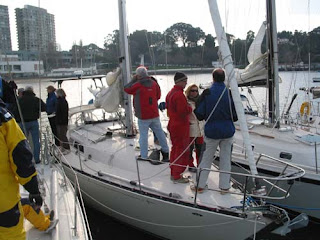 The sea scouts sailed around the raft as the gang tossed cookies into their cockpit. Happily there was a lot of laughter coming from the club that day... 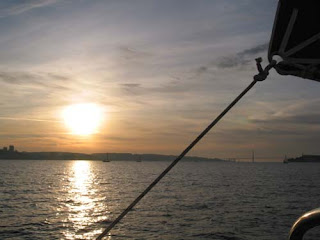 Too soon it was time to start heading home so we would have a chance to get into our slips before nightfall. During the sail home, we happily thought about how lucky we were to get such a gorgeous sunny day for the cruise. 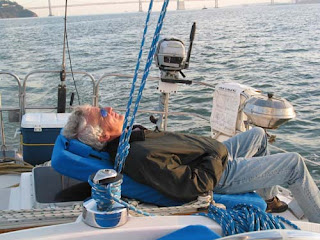 John enjoying the relaxing sail back to Berkeley 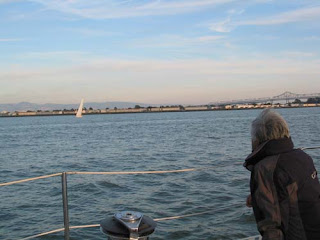 Henry looking for someone to race (you can take the racer off the race boat, but you can't make him stop racing). 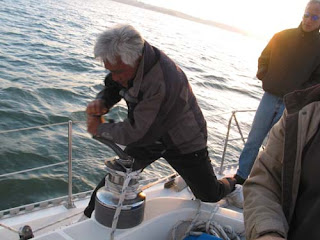 For a while Henry ran around trying to tweek Pura Vida to get as much speed out of her as possible. 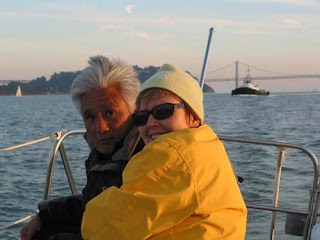 Our Commodore Jeannette and Henry enjoying the sail home...

I sure hope the great cruise is a sign of a good year ahead...
Posted by Melissa at 11:11 AM No comments: