It was about a month after our return from Hawaii, I was happily settling into my old routines of waking mom at 7, rushing down the dock, acting like a maniac and enjoying my cozy non-moving cave when mom changes and the day is not centered around me. She left me alone and went shopping and running errands most of the day. The good side was she brought back lots of yummy things to eat - and mom and dad's friend Jolanda brought over a huge bag of edibles also (maybe, just maybe she can be my friend, too? - I mean if she's going to bring stuff to eat and all....maybe I'll wait to see if it's for me). I did put my paw down with her and demand to get my play time with my playpals and Miriam though!!!!

Friday was very hectic with mom getting the boat ready for something - it had been a whole month since we did a long sail - well we did have one day sail thrown in there, but that's just a matter of tidying down below, readying for an ocean sail is another thing -- whoops, did I mention ocean? Forget that part, I'm giving the story away....

Mom had been all stressed checking the NOAA website - I know this because she kept asking me to move from my under the table lounging spot so she could get on the computer. You see the forecasts were for high winds, but the seas looked okay and within mom's 'ok to go range' (she can be a bit of a worrier). Most of the time the forecasts are wrong, not to say the forecasters aren't doing their jobs are anything, but that's just the normal feel of things around Pacifica. Anyway, even though they are usually wrong, they are sometimes right -- that's the tricky part. Mom feels like she should be prepared to handle anything. Enough about mom - this is about me.... And for the record, I want 15-20 knots of wind and flat seas!!!!!

Friday evening comes around, dad gets home from work, Jolanda comes over with more bags of stuff - that's the kicker for me that something big is up. Mom starts the motor, dad gets the lines and we start leaving the slip. Here's the tough part for me, are we going for a day, is this a short passage, or will we be gone for another 21 days - I don't know. I'm in it for the moment and running around on mom's heels as she pulls up fenders and dock lines. I help dad raise the sails and mom puts on my booties and fleece.

And, HOLD ON....It's a rollicking windy evening sail. Pretty soon we have 3 reefs in the main and the Genoa deeply rolled up. Hey, what about Cecil - shouldn't he be out here? I heard mom and dad saying they wished he was up (Cecil is the name of our staysail).

Fortunately we were only headed for Aquatic Park for the evening and we got in just before sunset. Unfortunately this is when mom remembered she forgot to fill our water tanks. Whoopsy! If we were cruising, this wouldn't be an issue cause of the water maker - but we're not and it's already pickled and parts tidied away until probably Pacifica's next owners take her out for a big adventure. I quickly started to hoard my water in my aft cabin, the parents like diet coke, well - let them drink diet coke!

We had a peaceful evening at anchor next to the only floating maritime museum and on a beach in front of Ghirardelli Square. 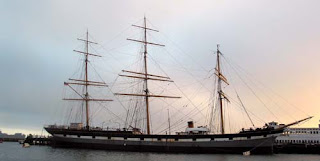 How about this view off your stern? 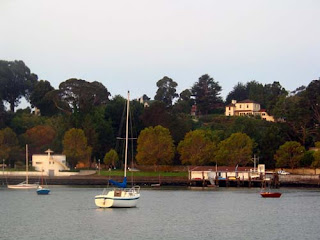 Or this one off your bow?

Early the next morning, we readied ourselves for the windy trip down the coast. Our friend Julian was meeting us at the park as was Sharon on Pearl of Oakland. The amount of boats leaving the Bay was astounding. We totally don't remember that from last year, but it was such fun. We had nice wind and were able to sail to maybe a mile outside the Gate then the wind just shut off....and stayed off. So that windy weekend we were expecting turned into a motor trip - so we were motor vessel Pacifica. Oh, coming into the Bay as we were leaving was a catamaran, KatieKat who was down in Mexico this past season and did the bash instead of crossing to Hawaii (you can click on their boat name to read about their adventures over the past 7 years). They have lots of sea miles under their keel and were debating about crossing to Hawaii - that's how we met them. This was KatieKat's return to the Bay, so it was great for us to be able to welcome them!!!!

It was totally fun to be in such company with lots of boats during the trip. Don't get me wrong, we love the peace an serenity of being miles (even thousands) from anyone or land, but there's also a thrill and enjoyment of being with other boats - at least for us. 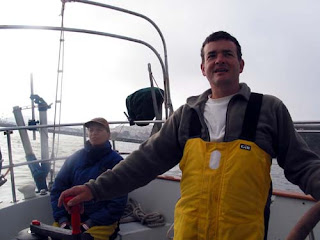 Dad and Jolanda heading toward the Gate - still inside the Bay so able to sail. 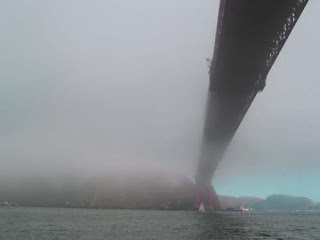 Passing under the Gate - always an awesome sight. 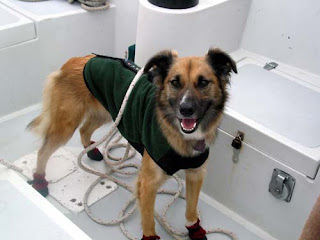 Me living dangerously tangled in lines... 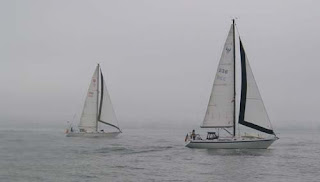 Trying to sail outside the Gate - yes, those are Southerlies you see.... 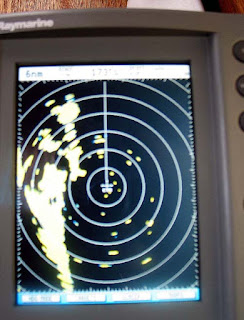 See all the other boats? Each dot is a boat, and that doesn't include the guys that don't show up on radar. 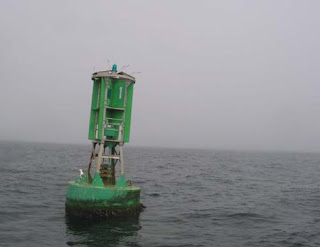 The HMB Buoy... Sadly no sea lions were on it this time - I love the sea lions frolicking.

I love to see even buoys, so from a doggie's point of view - I think the entertainment's great!

We pulled into Half Moon Bay early afternoonish. It wasn't as crowded as we remember from last year, but there were still a lot of boats. We hung out aboard Pacifica for the day, joined an impromptu potluck dinner aboard Galatea. Oh, 4 other boats rafted up with us: Pearl of Oakland, Molly, Galatea and Cappuccino. we all had a great time. 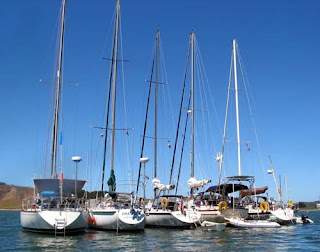 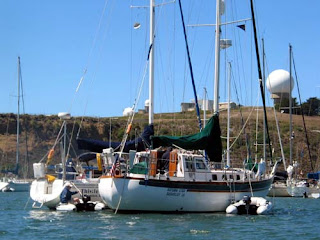 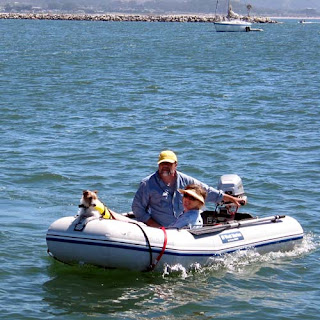 Doug, Catherine and Jill heading back to Galatea

Sunday Jolanda left us. Dad took me to play on the beach and be the wild woman that I am. I found a doggie to romp with. Later we went for another walk ashore near the marina. Mom and dad did the BBQ without me since last year when I went, I played hard, got wet and sandy, then huddled to them till they brought me back to the boat. 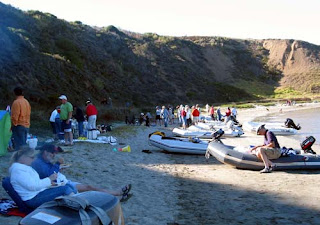 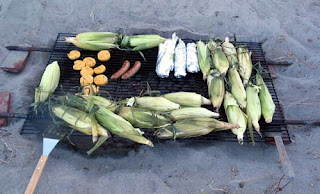 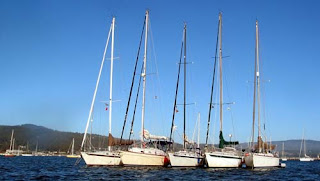 The raft from the front... 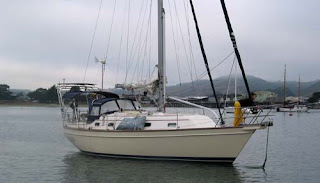 The big challenge of Monday was getting your anchor from the muck. I think Cappuccino had the hardest time fighting the mud gods for their stern anchor of all of us (the raft mostly hung on their stern anchor all night keeping all of us from swinging so it was well dug in). Here is Galatea motoring along hoping turbulence will knock off most of the muck.

Monday we got up early and motored (though we tried to sail a couple of times) home to SF Bay. But after coming under the Gate the wind picked up and we had a fantastic sail along the city front then back to Berkeley.
Posted by Melissa at 10:54 AM No comments: