This past weekend was fleet week in San Francisco. Mom told me it was a time the area celebrates the military. Usually the Blue Angels come every year, but this year they were in Hawaii and the Canadian Snow Birds were coming instead. This is totally fine with me since I like birds much more than angels - well, angels fly too - so I might like them as well - but I certainly don't see as many of them.


We hadn't planned to go sailing this weekend, but since the weather was so nice, we couldn't resist. While watching the presidential debate on Friday night with our friend John, he thought he would be up for it - so we would invite Robert and Yuan and try to get as much of the gang here as possible.


After a little lunch at anchor in Richardson Bay, we poked our nose under the Gate. This was a little windy and bouncy for me, so I decided to take a nap in my den. 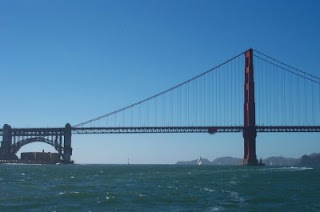 Here's the view just before the show started inside the Gate. Mom and dad left me down below because they thought I might be scared by the birds - I never met a bird that scared me!!

About halfway through the show I was awakened by some strange noises so I popped up in the cockpit - mom called me to the foredeck and I saw the weirdest sight.... 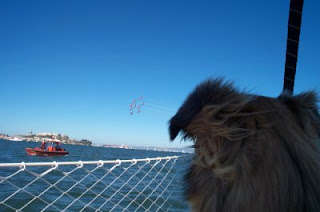 What are those things??? Mom told me they were planes, the Canadian Snow Birds. What??? I thought I was going to be able to chase some birds? Could this be true, I only get to watch them fly around? They were kinda cool the way they flew in formation and reflected colors off their wings. 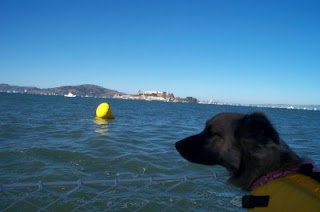 We had to stay away from them because we couldn't go inside these big yellow markers. Mom said past years the planes were allowed to fly right over the top of our masts. 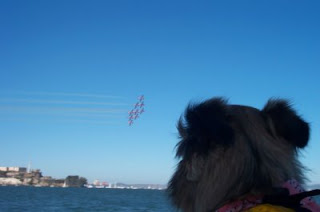 Here's another fly by of their formation. They weren't scary at all. 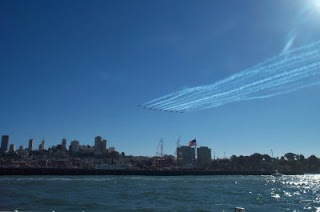 They ended by flying across the city. 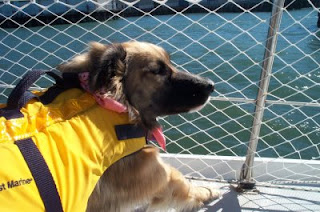 And I being the ever polite little doggie, gave them an appropriate bow. 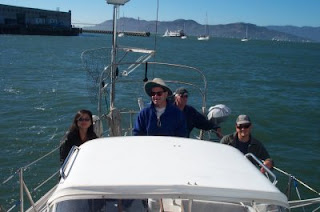 Here is a picture of the gang who watched the show with us.

After the planes left since we were near the city, Dad told Robert to take us near Pier 39 so I can see the sea lions. 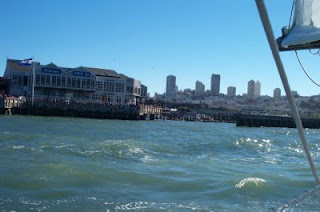 They always interest me. The barking sounds like my first language but since I have so much trouble understanding them I can only assume it's a dialect of my native bark. 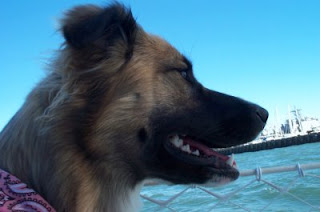 So, while we were trying to head home, we were trying to take the stern (go behind) the Jeremiah Obrien (a very large ship) but had to cut the corner of the no entry area. Since the show was over, we figured, "no big deal, right?" WRONG.... 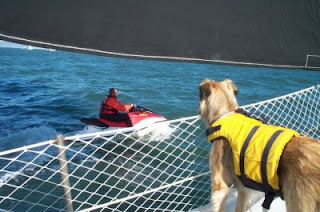 This unresponsive Sheriff-ski refused to look at us or answer our question of if we can take the stern of the Jeremiah (who was already starting to turn into our path toward it's home). All the sheriff-ski did was aim his jet ski at our bow so we had to turn into the Jeremiah's direct path. A very poor nautical choice if you ask me!!!! Luckily, Robert is an excellent skipper and did a number of fancy maneuvers to get us out of Jeremiah's path and back on track toward Berkeley - though I'm sure we caused the big J a little concern and the cockpit crew was working hard to get us straightened out. Glad I was up here with mom.

We then had a nice sail in to Berkeley. 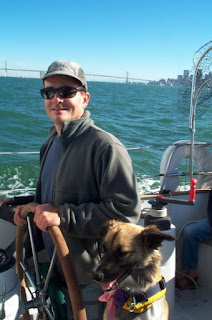 Here I am with dad. 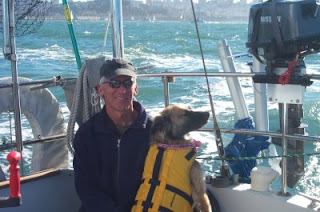 Then back with my buddy John. 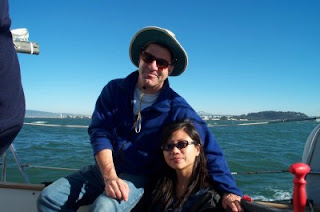 And here are Yuan and Robert. 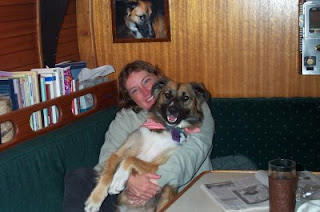 And most importantly, I got to finish off the day with a little snuggling with my mom (I have to be really nice to her since she is helping me with my webpage).
Posted by Melissa at 2:01 PM No comments: